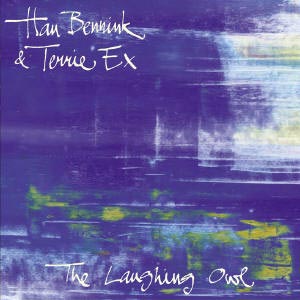 Try to imagine the sounds of a laughing owl, and you might find yourself hooted out of your somber existence. Dutch drummer Han Bennink has made a career out of his quick-witted sense of humor, and he finds a willing partner on this expedition with the Ex's noisy guitarist, Terrie Ex. Both players certainly have the experience to justify a fresh round of free improvisation. The 17 pieces on The Laughing Owl range from spacious, open interplay to rousing, intense firestorms of activity. Rather than simply juxtaposing styles for the sake of contrast, Bennink and Ex prefer to work within shifting contexts.

Their interplay here reflects an abstract kind of call-and-response that ironically owes its (admittedly distant) origins to the blues. A track later, Ex tinkers away with understated Bailey-esque treble pulses, bantering back and forth with Bennink in a context that respects silence as much as it violates it. Despite the often serious aspect of The Laughing Owl, one has a strong sense of spontaneity. These two players clearly got together to see what happens when anything goes.

Bennink has recorded a number of duet records that seem to bring out the best in his partners. The Laughing Owl certainly is no exception. The absurdist sense of irony that pervades much of his work makes its own elegant appearances on this disc, though for his part, Ex seems quite focused in his intensity. At times, the guitarist even plays sequences that could be construed as conventional melody! Bennink generally sits back and plays the role of a partner in crime, rather than leaping out as a leader. The energy level remains quite high on much of this disc; one has the feeling the recording is meant to be played very LOUD. Even the most bird-like scrabbling between these musicians has a sharp, dissonant edge. The Laughing Owl may be about as "out" as today's free improvisation gets, but it retains enough of a conversational aspect that it bears interest upon repeated listenings. Nils Jacobson, June 2001 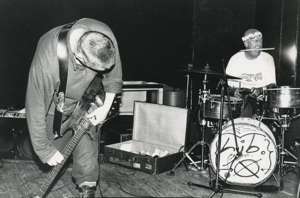